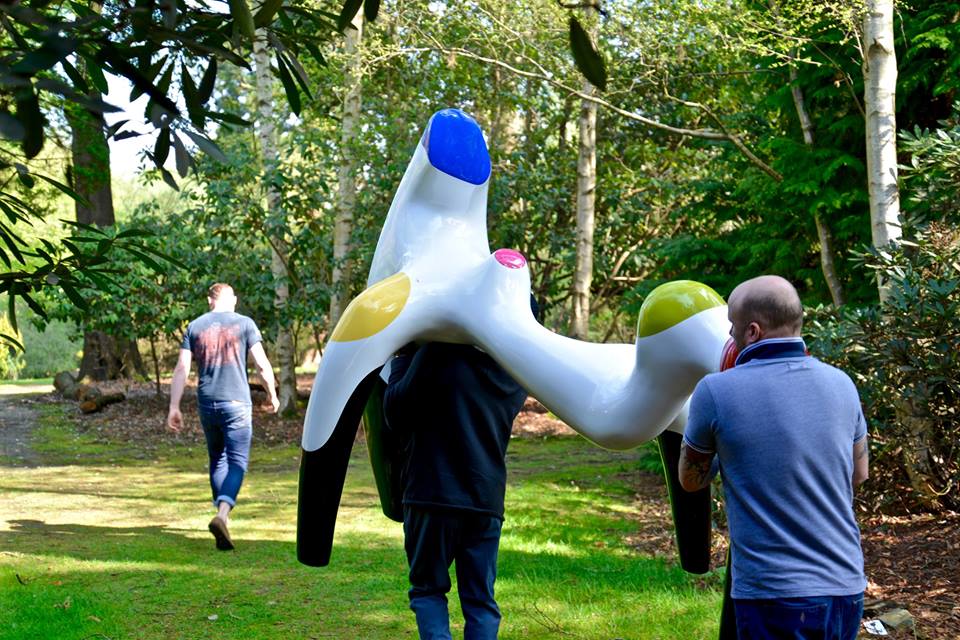 Last week almost at the same time that I was writing about ‘Back biter’, we got an email enquiring about pieces from the Rudimentary collection to exhibit at Contemporary Sculpture Fulmer, part of the William Benington Gallery.  The outdoor space seemed a perfect location for them.

So, it was a last-minute organisation and consequently there was only a seven and a half tonne wagon available to hire. A few hours later we got an email from Saatchi online to say that The Keyhole Man had sold but the client needed it immediately for an event so it would have to be ready for Tuesday. At the same time as sorting out vans and drivers for sculpture delivery. We were printing off the paperwork for transport and  organising a crate to be made. Things always seem to happen last-minute and all at once!

On Sunday morning the alarm went off at 4am and the sculptor got up to go to the studio and with his two side kicks and the rather large truck travelled down to Buckinghamshire with sculptures loaded up.

This pieces looks even better outdoors with the reflections of the branches bouncing of the almost spider-like sprawl of Back biter.

Meanwhile, I was still in bed but unable to get back to sleep and for some reason my eldest unusually knocked on the door at 7.30am.  During the week I am the first to rise at around 6.30 but 7.30 felt far too early after not quite enough sleep. However, we all had to go out for the youngest football match. So I felt that I dragged myself out of bed.

Saturday had been a super glorious day with full sun and blue skies so it was a stark contrast to be stood in the rain and cold wind watching the football. We headed home for baths and snacks and an early lunch and I had to get on with painting the cupboard housing the attic ladder. Our attic conversion is almost complete but there is still much to be done in the remainder of the house. The good thing about having spare wood and tools lying around the house is that the boys busily got on with making a trident and Warwick castle inspired swords, not without bickering which seems to have become a new stage. The tiredness of the Saturday sun making us all a little weary.

For the sculptor in the van in the south, it was another hot and sweaty day and doing ‘a there and back trip in a day’ with a capped limit of 60 mph meant he didn’t return until 9pm. He was still adamant he would get up for a morning appointment for our business and then crate up the ‘red man’. Needs must. Somehow he did manage to get himself up and out. Perhaps, the southern sun had given him an extra dose of energy.  All worth it for how stunning these look in the grounds though.

And so ‘ Back biter’, ‘Widow’ and ‘Mademoiselle’ are now all in a new home for the next few months, great to see them outside in all their glory. Masterful pieces of hand carved sculpture.

A busy day for us all and how that has a ripple effect on the week, more so with the fact that the house is still upside down.

‘Tiptoe’, looking like a Dr Seuss creature exploring in the woods.

‘Mademoiselle’ strutting her stuff in between the trees 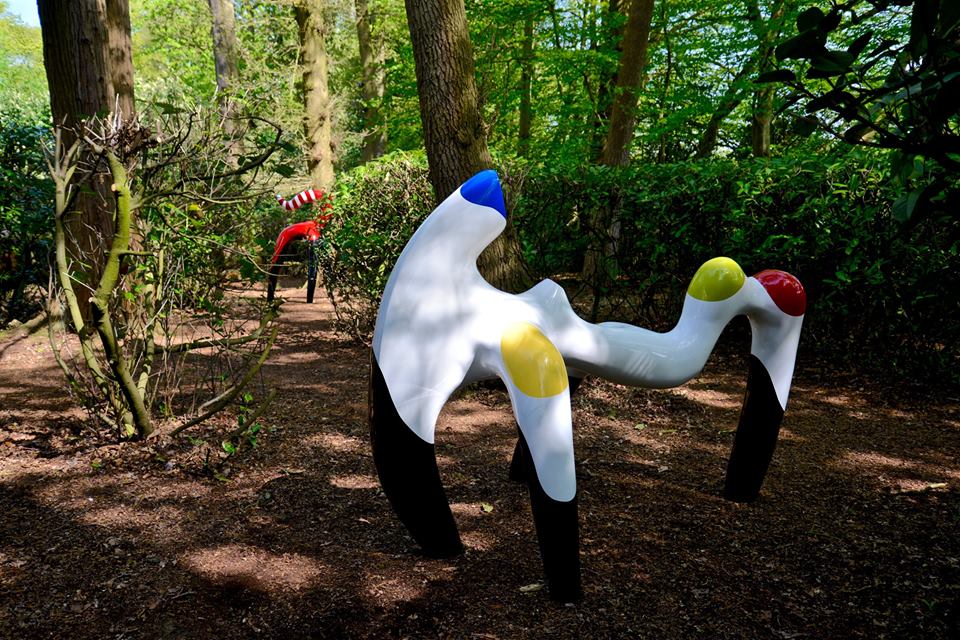