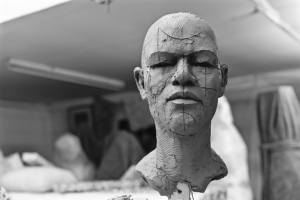 Many people I spoke to in March had a miserable month. With the change of the clocks, lighter evenings and daffodils and lambs appearing perhaps April will bring a solution, a peace and a resolve. Listening to the radio the other day, the broadcaster said she had observed as she got older she was acutely more aware of the seasonal change. Perhaps there is truth in that, as we grow older we become more in-tune with natures cycles and the awareness that everything perishes and then there is life. I can’t fully remember what and why I was telling the boys the other day, that sometimes we have tests or difficulties and then we meet people who are having greater tests and we are reminded and humbled into realising our own blessings.

I feel that too at the moment. I feel March was a testing month. I am constantly being reminded that I need to develop greater patience and calm. I think part of my personal turbulence has been to do with sorting out boxes from the attic in an attempt to de-clutter and make more space. It is a strange process and looking back at letters in boxes from as far back as 1986 re-lives a little of your own personal history and also reading others stories from past. I have come to realise with my husband’s wisdom; that the past is the past and no need to be relived. Inspired by an American guy who has just totally reduced his possessions to 111 that he is carrying on his back. I am determined to reduce the amount of ‘just stuff’ I have. Although, I am still unsure how to get rid of much of my memorabilia. How much do our possessions take over us? 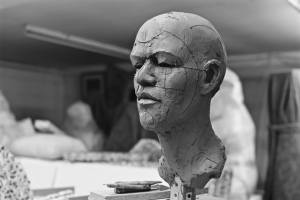 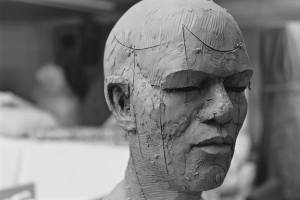 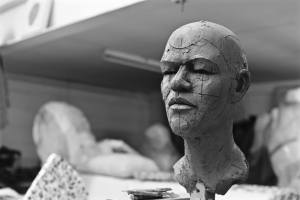 I usually only post images of finished works, yet sometimes I think it is good to see the process. This also is such a different technique but shows the skill of my husband’s hands. When I first saw this piece I said, it reminds me of William Tell. Who is William Tell, my husband asked. I couldn’t remember just the story of the boy with the apples on his head. So I did a little research. He was the archer and the boy his son. He was asked to bow down to the leader of the area and he refused. So he was asked to shoot one of his arrows through an apple positioned on top of his son’s head. He successfully shot the apple. The leader noticing a second arrow asked what it was for. Tell, said if he had missed and killed his son the second arrow was for the leader. The swiss fable became a story of liberty and freedom. 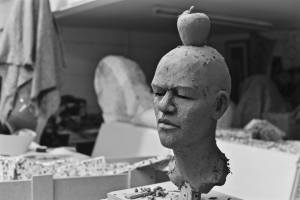 As I try to free myself from my attachment to letters and souvenirs, I wonder how much possessions actually weighs us down, literally and metaphorically, some how. In general as  a society we seem to attach more sentimentality to our things now more than some people do to other people.

My husband generally purchases more than I do but he never gets attached to it. Even his work. This masterful sculpture looks like it should be cast in bronze or marble. He started talking about colouring it in ways that match his current work. For example, the entire piece gloss black with just the top of the apple in red, or different coloured sections on the head…..

However, these images are not only the process but now the memory. The piece no longer exists. ‘How could you do that,?’ I asked my husband, as he showed me images of the head looking like a claw had swiped through it. ‘It only took me a couple of hours to make, it’s a practice. Not something to remain’. He is also a bit wary of making realistic portraits. It looks like days, months of work but it isn’t for my husband. He is fast and precise. Making something ‘real’ looking isn’t what his current practise is about. This was just to keep his hands in clay, just a process. Practising.