After installing ‘The Bench’ in London which was no easy feat, negotiating doorways, pathways and gravel paths it wasn’t without a bump or two. A small collection of work also had to be unwrapped, polished and placed inside the hotel which took a little longer than expected. So at 4.30 they quickly had to leave as they were due to be further along the river. Phoning to apologies for the delay they thought their next destination was only 1 hour away but that doesn’t factor in rush hour, London traffic and a small narrow bridge to get to Henley.

It was now 7pm and having only eaten a croissant in the morning, 5 hours sleep, travelling, lifting, polishing and positioning exhaustion was beginning to set in. Wrist band and security checks and HGV wagon to park they could then finally start placing work. 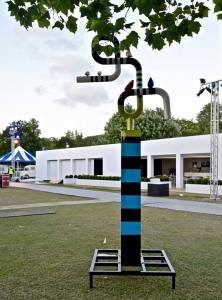 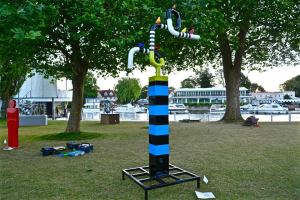 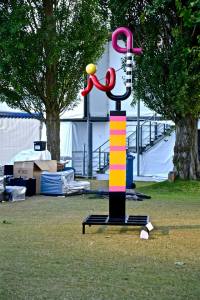 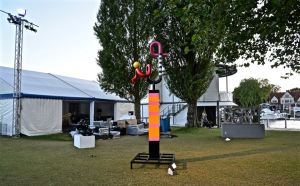 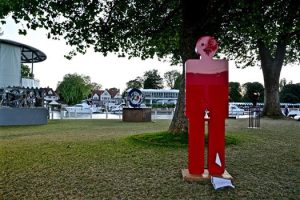 For me Henley is rowing, I raced there is 2001,spent a training camp so again the sculptures are following places of my past. My husband hadn’t realised how close to the river the pieces would be. So a good realisation that he had installed 4 pieces along the river Thames in one day. Also a couple of his sculptures  are being exhibited with  Hay Hill Gallery within the grounds.

The journey didn’t end there though. After finishing and packing up they left Henley at around 9pm. Still not having eaten and rather famished but with large van in tow it was difficult to park up and eat. Deciding to travel back up the M6 they would stop at a service station -why they didn’t just stop and eat I can’t really fathom, something to do with fighting the fast food principles so it ended up being 11pm when they finally ate a not partially pleasant sandwich. Then in an unfortunate turn of events the M6 had several diversions and a stop for a short nap to keep them going meant the sculptor finally got back to the house at 5.45am the following day. HUGE thanks to Anthony Hartley.  So the night of no sleep was the day after, after all. Is that what all sculptors do? my husband is wondering. When do you get to a point where you have a team of people that take the work for you instead of being on the road yourself.