‘As the birds wake in the dawn and the sun begins to rise, the soul is more in tune with the supernatural.

It can be strange sleeping in a different place, sounds and sights less experienced. In London last weekend a loud thud woke me from my sleep, I visualised a lorry over turning, sliding and landing with a bang. I heard the birds chirping their dawn chorus amist the unnatural flashing neon lights.  My first thought was that the refuse collectors were picking up the rubbish. With grinding sounds, beeps and distressed noises which disturbed the natural order, I realised it was too early and got up and looked out the window. Fire engines and police cars were the ones flashing their lights but I couldn’t see an incident. I moved to another room to see the trauma yards from the house. Several fire officers and paramedics trying to cut their way into a car which was not too far from the window having brought down the garden fence. Not sure if I should be watching but riveted to the spot I watched as they took off the crumpled car door. A man’s body inside. Once through the metal barrier they slide him out in seconds. Surprised that they didn’t then whisk him away to the ambulance, I peered through the break in the blind as they cut off his clothes and left his exposed chest for what seemed a while and I feared he had died on impact or on the extraction from what was his car.

I wondered if his soul was hovering above at my window in the mystical morning of early hours. There was a slight movement of the arm and I realised he was still alive,they finally covered him after putting in an intravenous drip, tube down his airways and practically operating in the middle of the street. Whilst people around slept unbeknown to them the amount of people assisting in this incident on the street below. I thought about all the people doing ‘their job’ for the emergency services and how they unwind and clear their mind after such emotional and visual experiences.

Once the ambulance left with the man safely on board. I went back to bed and sleep finally came. I floated out on the street like a voyeur, one of the woman came over and hugged me and I whispered how amazing the work they had all done but it turned into a tight grip and she asked me why I hadn’t done more to help. I woke and wondered whether the whole thing had been a dream but in the bright sunshine of the sunday morning the remains of the scene proved it had happened.

In the light of day the ghosts of the night were no longer there. The streets were cornered off with tape and the ruins of the fence lay littered around the crushed metal and broken glass that was once a moving vehicle. A possession. A means of getting us quickly from one place to another. It made me think about how we put so much value on our possessions when they can be crushed instantly and rendered useless. Our precious souls on the other hand we take for granted. Bodies saved by the many who work in professions which call upon a kind of heroism that goes sometimes unnoticed.  Our physical being so vulnerable, so easily crushed but so resilient, ultimately only the creator knows when our body is to be crushed, no longer of this world. Our soul to be returned.’

Exhibition of ‘Souls’ in three weeks time in Blackpool. So, if you haven’t managed to get to an exhibition in London because you live in the North of England now is your chance to view the pieces which ‘invite the viewer to delve into their own imagination and think deeply about their own existence.’ 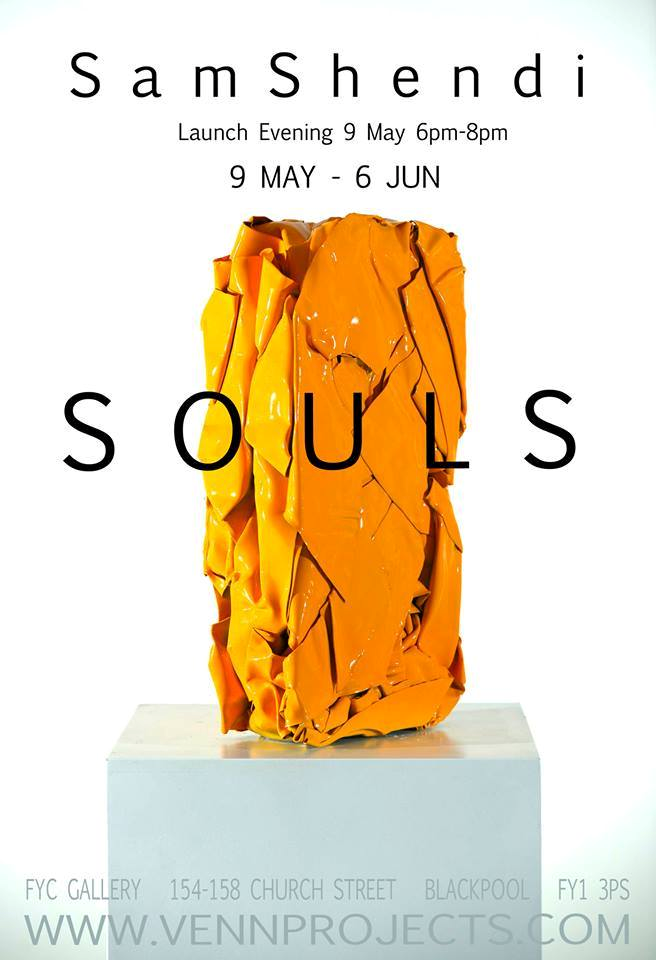