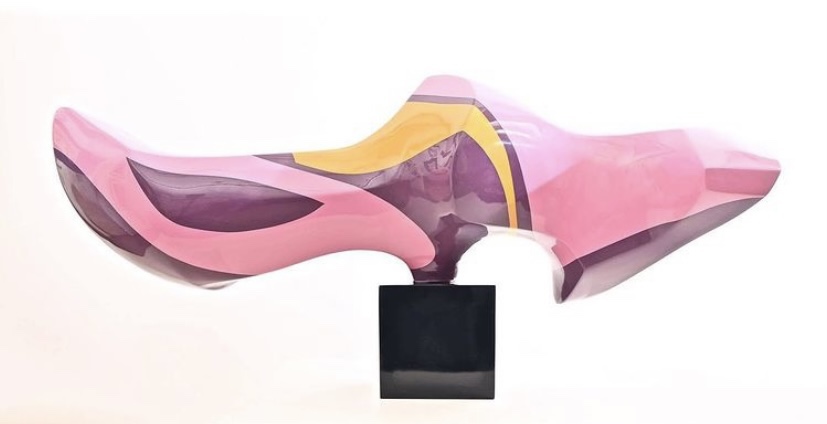 As the natural world around us is literally frozen today as I write, this last day of 2020. It as though time is suspended. So many things in life were suspended this year. Waiting.

As we straddle one year to the next I feel increasingly aware that time is really inconsequential and that we mark time, create time for plans and accruements that we have no guarantee for.

This is no different from how life has been before we have been faced with a reality this year that has taught us to slow down, reflect, hibernate. Here in the north of England we are deep in winter snow which mirrors that intense desire to curl up.

The global situation may seem desperate, bleak but if we focus on what is in front, what is within then we can uncover hope. As seasons change so can we, and unfurl into spring. For now we really have nothing more than the moment.

Friday afternoon I took the boys out of school and headed down to Barnsley, it was busy on the roads but according to my phone we were in good time. The boys had snacks in the back but my youngest wasn’t happy with egg sandwiches as they would make him smell he grumbled. This is the boy who eats enough eggs to warrant me having a chicken farm. My eldest pointed out the sign for Barnsley but ‘no’ I said with trusty faith in my technology, we were coming off at the next junction. So we finally came off the motorway and  into some traffic works and something didn’t feel quite right. So I pulled in at a garage and looked at my phone. Somehow, and I have no idea how this happened I was heading to the wrong postcode. Fortunately still in the Barnsley area but I had over shot and we were much further south than we needed to be. So I had to turnaround and head back 20 min north with only 5 minutes until opening time. My eldest who usually joins in with my panic with sound effects was surprisingly ultra supportive in my panic. Reminding me that it was all ok, that we were all ok and we would still get there. That everything was going to be alright. It was a good little test for me. I knew we didn’t need to get there at 4pm on the dot but I do like to get to places on time and it was frustrating. Trying to keep calm I reminded myself to think that for whatever reason we had been sent on a little extended tour getting frazzled wasn’t going to help. It was getting darker, and busier driving into the one way system of the town centre so my tension did increase a little. We found parking easily enough and found the gallery. Only 15 min late.phew and not overly stressed. So by the time I walked in I really needed a moment to compose myself as I then faced this: 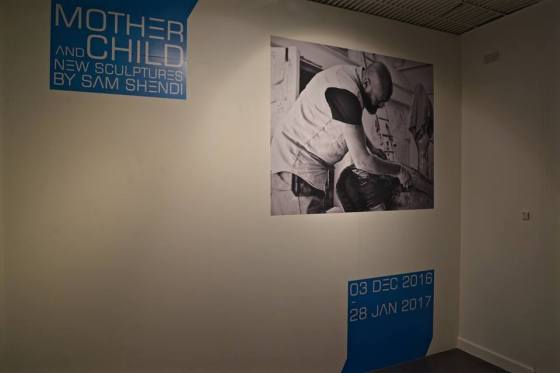 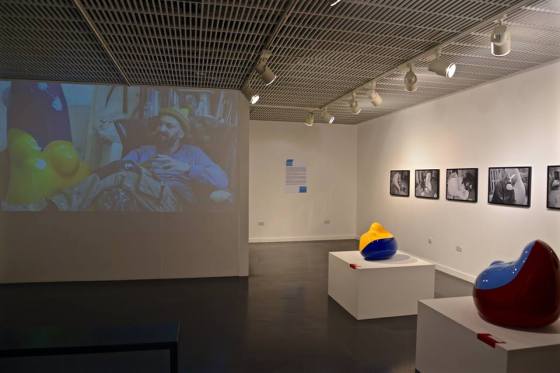 It was amazing to see the projection of the video, the black and white photos of the process, and into a space with all 10 glorious sculptures together, with clean white walls and fantastic lighting to set them off. The boys took pictures and their sketchbook around, our youngest a little more keen than the eldest unusually so. The eldest appearing to showing small signs of transforming into a little teenager.

There were just enough people there for the private view to make it intimate and for us to talk to the people who had made the effort to come along. The Civic has some lovely interactive activities for children if you can make it whilst the show is running. We have already seen a few more press articles and photographs which are stunning, more of which you can see on The Sculptor’s Wife Facebook page. or this one below is good, if you have managed to stay off the world of Facebook. 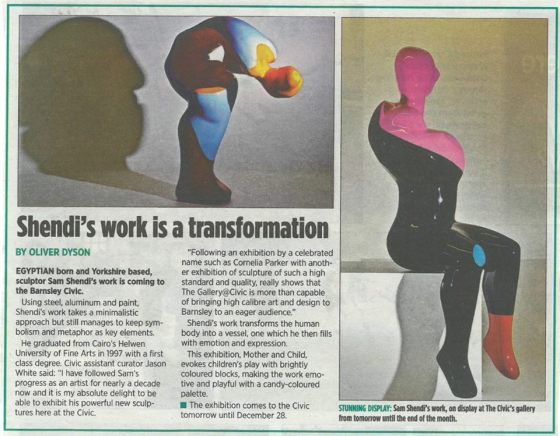 I love the idea of transformation. We all have the ability to change. I think winter is the time to prepare for transformation. This morning the scenery on my way to the shop was stunning. The trees in their bare winter glory stood like silhouettes against a hazy, sleepy, wintry landscape of greys and blues with a bright sun lighting up the valley making it twinkle. The land retreats into a cold crisp coating. We can retreat to contemplate the year past and marinate in stillness on how we deal with things in the moment. So, we can be calmer and focused in those times of stress and panic be it small or big, when you get lost on the road or in life. Using that stillness to have the ability to see beyond the discomfort of the moment and know that ultimately everything is going to be alright.

So much has been happening of late that I haven’t had time to finish a blog entry. I was thinking of merging them into one but will try to be focused and get it done in two.

The sculptor has had various interesting meetings recently which included a workshop for the first time which went well. It was focused on his exhibition and for the participants to create a sculpture but he wanted the group to focus on drawing their idea first. A large collection of work went in a restaurant in the middle of Bradford city centre, and that followed with a radio interview for BBC Radio Leeds. (Sound bite will only last for the night 3 days and he is speaking at roughly 40.43). 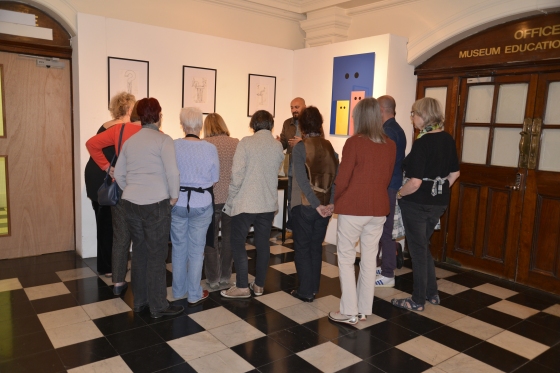 The sculptor talking about ‘drawing’ at the responses to art workshop

We all went for ‘The Big Draw’ at Cartwright Hall during half term and had well over 100 people draw on huge paper which we intended to wrap around the building but it was too windy on the day when we wee finishing. It was really interesting to see patterns in drawing. 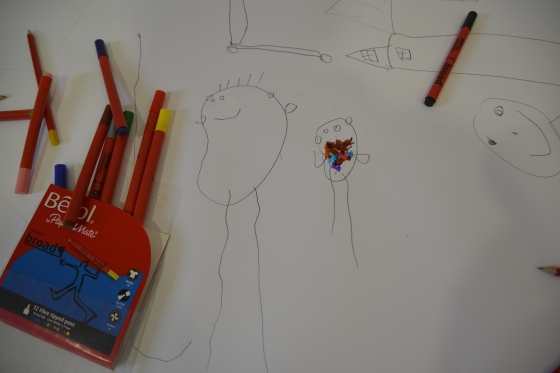 Lots of 4-year-old drawing circles, dots and lines to represent bodies. Parents drawing houses, some finding inspiration from their family. A grandparent sat for a good while some fantastic shading in of a beautiful snail his granddaughter had drawn. A young boy drew his fish tank with amazing detail and a family came in to warm up from the park and covered their paper in ducks and birds and visions inspired by Lister Park. Upstairs in the gallery Tim Curits , another local artist who does lots of drawing in his own practise, they were looking at a college and self portraits and making pictures of themselves with newspaper. Drawing upon a lovely collection of Hockney’s drawings and college work.  Our eldest, feeling comfortable to roam the gallery by himself went to see what was happening in Tim’s workshop and usually keen to do anything creative declined out of loyalty to Baba downstairs. It was the first time for my husband to do this community art workshop event. We had thought that we would ask family to look at each other and draw each other , perhaps looking at the style of my husband’s sculpture. However, when its a drop in and the numbers fluctuate with busier times and quieter times it was just good to see people sitting and drawing and not being too prescriptive.

The gallery was a hive of activity and what was also interesting was seeing on one wall in the Hockney exhibition, all the drawings were hung at child’s eye level and there were little drawings of Hockney to find around the exhibition. So with the Big Draw event, Julia Donaldson exhibition and curators hanging work directly for children there is no better place or time to introduce children to the wold of museums and galleries so I totally agree with Jake Chapman and his quite ridiculous statement about children and galleries. 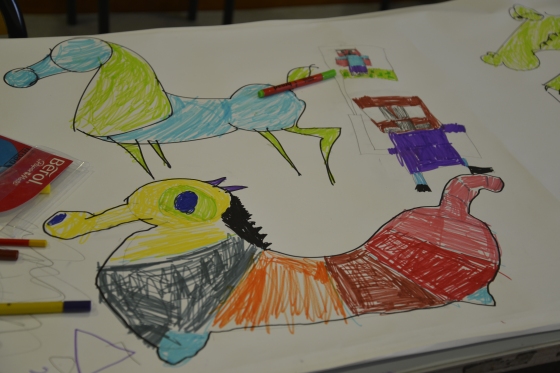 Our eldest’s drawing at The bIg draw event at Cartwright

Children aren’t suddenly going to want to go to an art gallery at 18 if they have been ousted in infancy. Art and drawing is already squeezed out of the main stream too much. Drawing is such an important and valuable skill and something we forget to continue to do as we grow older. With my husband and eldest constantly drawing it is something that happens in our house naturally but something I personally don’t take time to do. After such a busy half term the house is in a state where I have drawers to wash, draws to put things away into, we have been rushing around so much and leaving a mess.

I noticed this morning a sudden drop in temperature, the skyline grey and wintry. Like shades of  newly sharpened pencils crisp and fresh. Time to sit down, wrap up and draw. 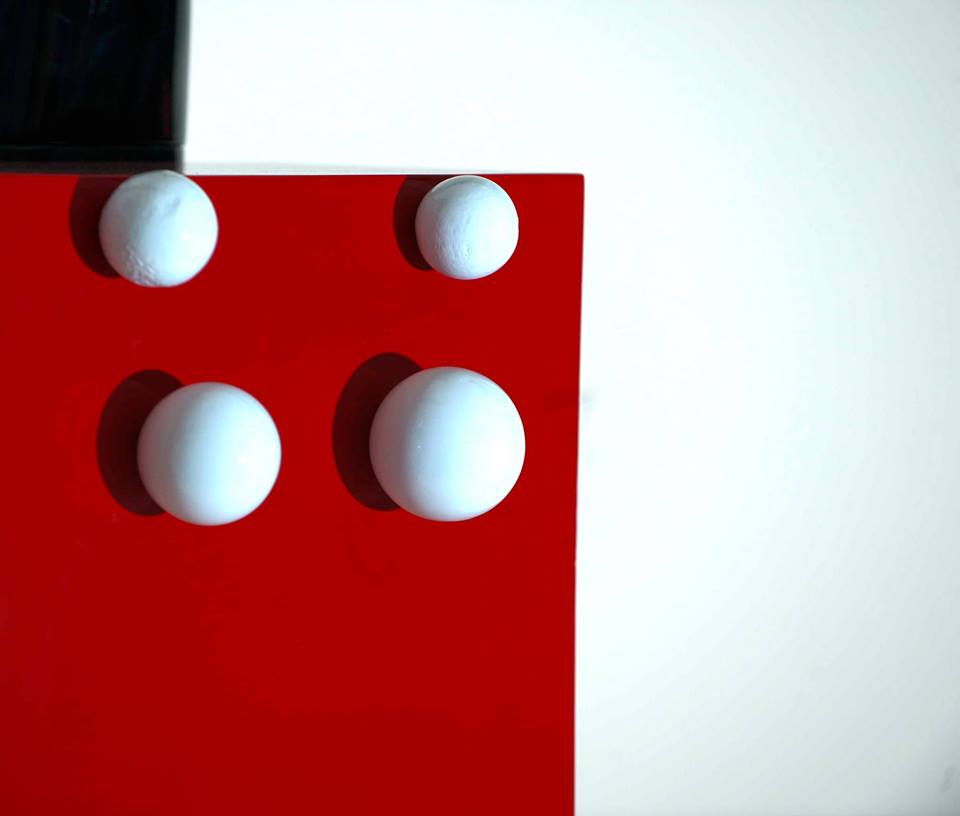 I have been busy this weekend ‘getting ready’ for my husband’s best friend arriving and staying with us. Shopping, cleaning, sorting, baking, cooking, all the things we do to prepare for visitors. It wouldn’t be a negative thing except for then nobody can do anything until guest has arrived and then everyone can relax and mess it all up again! I don’t mean to blow my own trumpet but my ‘traditional English roast dinner’ was practically perfect. With no burning or breakages in sight. This was aided with a list of timings and post stick notes stuck on pans. All the scrubbing and washing and wiping and brushing is a preparation for an end result that doesn’t last. The peeling, the chopping, the stirring, for food that is eaten in less than half the time. However, when done lovingly the pleasure is in seeing happy satisfied friends and family at the end of it.

This weekend also saw the wrapping and sorting of the sculptures ‘getting ready’ for transit this week down to London. My husband remarked that they all look like dead bodies, mummified ready for their journey to another destination. There is still a bit of paper work to be done but most of the preparation has gone really well. Then wagon is set to arrive for the loading and for a band of merry men to take the ‘exhibition’ down and install it for the preview. To which we will then all go back down again the following week. Again, which we will need to ‘get ready for’.

My brother is ‘getting ready’ for leaving home for the other side of the world and my sister for a new job. So we are in the ‘getting ready’ period. Sometimes it can feel like we are permanently in that point in time, preparing for something with the end result feeling too far away or when it comes around we realise the ‘getting ready’ was the best part.

I was a little premature in posting the pictures in the last entry. We are now in colour. My son has been entertaining us with his talk and body movements about Charlie Chaplin this week. They are doing the topic, ‘Light Camera Action’. He interestingly observed that it was when TV was ‘black and white’. Colour TV first came to the Uk in 1967, 17 years after USA. Then the rest of the world in the 70’s and 80’s. Which isn’t that long ago. The amount of viewing time is a bit of a debate in our house. I fondly remember my final year as a student when I didn’t have one. However, now cartoons and films are hard to let go.

These colours are very child friendly, primary colours, vivid and bold. It makes the pieces playful, attractive and acts as a juxtaposition for the theme. We need to reflect on colour, brightness, light as the nights draw in. It was practically the middle of the night when we drove back from school. This is an interesting article which I must read more attentively Winter and TV.